I have just finished pulling together ideas for a Alice in Wonderland Birthday party,
but you could use the ideas for a Mad Hatters Tea party also.

we are going with the Mad Hatters Tea Party theme…

Don’t be late for this very important date!

The Queen of Hearts hereby summons your presence at the Mad Hatter’s Tea Party
for a very merry Un-Birthday party
Honoring Miss (place child’s name here)
Place in Wonderland ( beside it we had the actual place)
Date,
Time 6 o’clock Sharp!!
Don’t be late like the white rabbit!
R.S.V.P The Queen of Hearts ( your number).
Also please wear your tea attire and your maddest hat.
COSTUMES

we are going for a MAD hats theme, to keep the cost down.

This hat is FAB…

I would glue them to a head band…

there is also a tutorial here for these mini Hatters hat

this is a very grown up version, of a steam punk Mad Hatters Hat

and you guesssed it there is a tutorial for this also!

Go here for tutuorial to make your own White Rabbit ears
But here are a few other ideas for you…
these Tweedle Dee / Dum costumes are just fabulous!!!

from Green Doodle
there are even some instructons on how to mke them.

the White Rabbit…
Oh my life, how sweet
and the Cheshire cat,
how adorable…

all from The Wiesse Guys
there are more too!
SETTING THE SCENE
DECORATIONS
We were greeted at the front door  by a very large card soldier.

This down the rabbit hole sign hung on the door…

Decorate your door so it represents the rabbit hole,
or the looking glass,
where people have to go through to enter the party.
Hang up signs with ‘this way’, ‘that way’, ‘up’, ‘down’, etc. painted on them, like in Disney’s Tulgey wood. 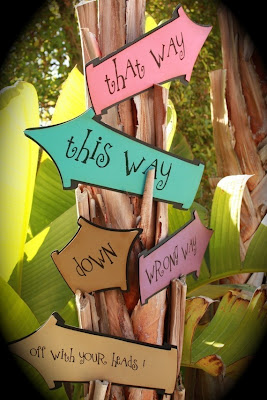 etsy
Decorate the walls with playing cards,
normal size are fab for bunting 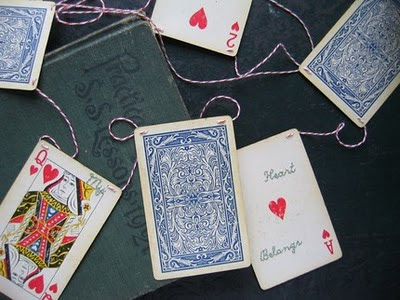 but we also found some A3 size ones where were used to make the soldiers.

Place on a Cheshire Cat plush toy (or just it’s grin) on a branch on a tree or hidden in a bookcase.

Vulture heads and paste them on top of some umbrella’s. Hang the opened umbrella’s from the ceiling 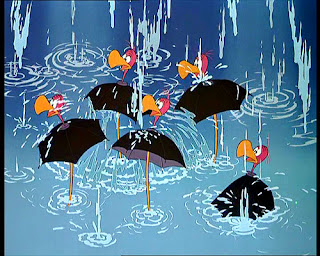 I  used two old paint cans painted the inside red, laid one on its side as if the card soldiers had been painting the roses red,

the other paint can I filled half way with plaster of Paris, while it was still wet I placed an old paint brush on it. I then painted all of that red.
And place them at the base of a tree.
*****
I used hand held mirrors (found in the pound store) and craft foam to create the mirror birds.
we hung these from the tree at different heights (quite low)…
so the girls they could see their eyes in the birds face like in the movie. 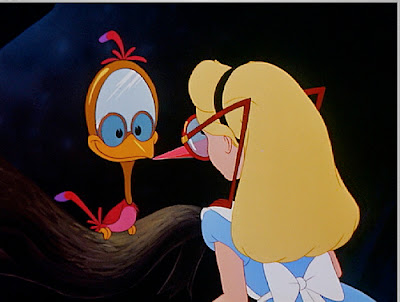 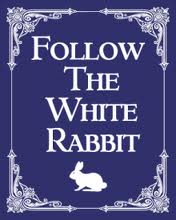 Make rabbit paw tracks and put them on the floor, leading in various paths through your house and garden.Vinyl ones pull off everything but carpet, we used garden spray chalk and cut a template for outside.
This is what they should look like…

Have an assortment of odd chairs or anything suitable for sitting on around the table,

so that people have to sit at different heights.
Place a large winged armchair at the head of the table, for the birthday girl.

Scatter Alice in Wonderland related items across the table,

Just take a look at this FAB-U-LOUS tea party!!!
I love the standard lamp!

Set up a long table, covered with all different kinds of teapots, mismatched teacups and saucers,
Combine normal sized teacups with some huge ones (like a flower planter)…

Have the kids form a line. Put on upbeat party music, and have the first person in line come up with various dance moves as the rest of the group follows him or her. Switch leaders after a couple of minutes.wear bunny ears and tail

Place a top hat on a chair

have the guests throw beanbags into the hat from a distance for points.

All Change(Musical Chairs)
Have the kids play classic Musical Chairs to the Un-birthday song from the Disney movie.
House of cards

split into two teams and each team gets a deck of cards.
put the timer for eight minutes the team with a card castle with the most cards in it wins.
Anyone for Croquet?
Get children’s croquet set. Invite the party guests to play a short round of croquet. 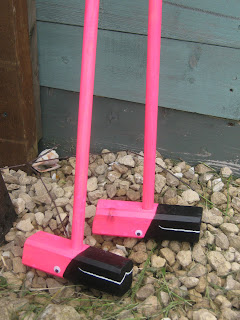 Gather a lot of teacups and put them upside down on a table.Under one of them, you hide a Dormouse

Your guests take turns and may lift one cup per turn to see whether they can find the doormouse,

mix the cups up after each turn.

The children sat in the circle with their pictures and we handed out ONE red marker.

(about 30 secconds to make it fair) then pass the marker.

and scream “Off with her head” at the child with the marker who was then out.

The winner of the game is either the final child in or else the child who manages to color their entire rose first.

Pin the Grin on the Cheshire Cat

Print lots of grins
and put blue tack on the back.
Tea Bag Toss

I purchased a giant ceramic planter in the shape of a teacup & set it on a small table on the ground. Each girl was given  tea bags and had to toss the bags into the teacup.The girl who threw the most in won a prize.
Painting The Roses Red!relay race 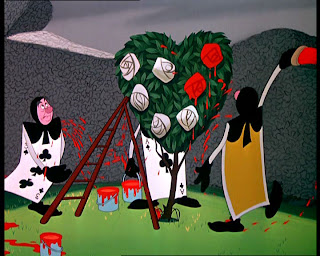 Now this was a lot of work but well worth it.

I got a friend to cut out two large MDF tree shapes (he’s a joiner) and drill holes in each where the roses should be.

Then I bought 16 red and 16 white artifical roses.

I removed the leaves so they would slide through the predrilled holes.

We split the girls into two teams and gave them a red rose each.

one rose at a time!

bringing back the white roses so the Queen of Hearts didn’t see them.

It was such good fun, we played it several times!

and put blu tak on the back of the red and white roses so they remove easily.

you could just place white artifical roses in a bush

One lump or two?

Object: Toss your sugar cubes into your teacup.

.
The adults had a game to play too!Birthday party ideas The adults were not allowed to cross their arms or legs.

If they did, the Queens (the girls) would hang signs around their necks reading

“I lost my head to the Queen of Hearts”

They were hung with ribbon around their necks

and were to be worn for the entire party so as to determine who the winner was at the end of the day. 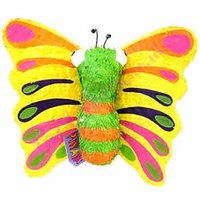 Eat me, drink me!
from here

sandwiches which were cut out with card suit shapes cookie cutters(diamonds, hearts, clubs and Spades).It wasted alot of bread, but most of it was crusts.

The presentation was worth it!

The Queen of Hearts did make some tarts

Just look at the Chesire Cat cake bites!!!
BIRTHDAY CAKELook at this Alice In Wonderland cake!!! 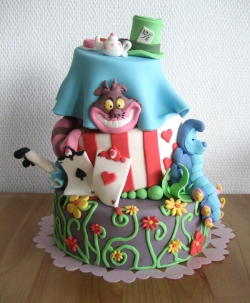 A china teacup with
an “UN-BIRTHDAY GIFT”  tag

a small pack of playing cards

small packet of sweets “eat me”

the door mouse (prize from game)

a hat fashion show.
Everyone came down the catwalk (hallway)and struck a pose for a picture whilst wearing their MAD hat. 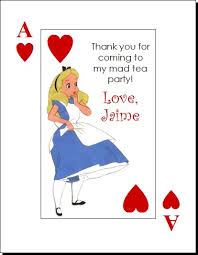 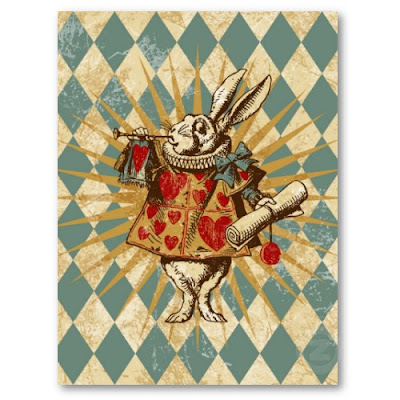 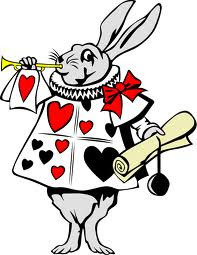 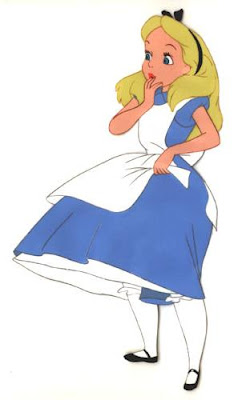